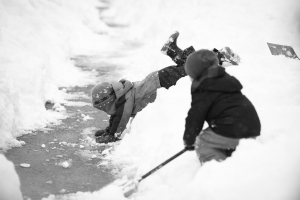 As a Director of a preschool, each year I am asked by parents about the gun play of children.  In my experience, it is almost always boys who engage in gun play – and it often has very little to do with whether or not the child has toy guns at home, or has seen guns on television or has played video games with guns.  In fact, some parents can become completely mystified and slightly derailed that despite their best efforts to shield their child from guns, that it is all that their son wants to play when given free time and space.

A few years ago, I had an epiphany – one that I haven’t shared widely as it is not based on any research or science that I am aware of – in fact, it is based completely on my own observations of raising three boys and a girl of my own.  And it has simply to do with the functionality of the penis.

Consider this – once a boy begins to use the toilet independently (which is for most US boys around age 3), they have the experience of shooting something (urine) out of their bodies (via their penis) – and they are taught to hold their penis and aim the urine into a target (the toilet).  They get to do this perhaps three or four times a day.  And they typically are rewarded or acknowledged positively for doing so.  It also feels good. It is a viscerally pleasing experience (relieving their full bladder) that is rewarded by the grown-ups in their lives (sometimes with treats and definitely with praise).

Gun play is rich dramatic play that happens on every preschool playground in one form or another.  Sticks, shovels, paper towel cardboard tubes, whatever is available is used to turn into a gun.  The play often includes good and bad; super hero and villain – and it is usually complete with gun fire that sounds surprising like urinating.  In my experience – almost always using a ‘p’ and ‘s’ sound.

When I consider gender differences in the area of gun play, I profoundly believe that it has more to do with a child’s anatomy specifically how they urinate – then it does with personality type, socialized gender differences, or what children are exposed to in their environment.  Of course these are generalizations and only to be taken as food for thought – no more, no less.  I argue that making sticks into guns is as natural to a young boy as using the bathroom – regardless of what they may have been exposed to through media, games, or other friends.

And here’s a deeper reflections, and some predictions:

On perhaps a more serious note, in the world that we live in today, it is difficult and nearly impossible to shield our children from gun violence.  Whether they are overhearing a radio, a report on the television, or listening to their parents, there is just too much in these recent months to completely shelter the youngest among us from news of gun violence.

It could be that despite any silly musings shared above – that we will see a rise in gun play among children in preschool environments because of the importance of the ways children will need to process what they don’t completely understand (and for which none of us have much control over).  Research (yes, real research) shows that children use dramatic play to act out real life situations and that kind of play is important to their coping and emotional development.  So while our immediate instinct and tendency as parents and teachers is to stop that young child from playing guns and shooting their friend with a stick – it may be time to rethink and allow children to work through some of their real fears within reason either at school or home.